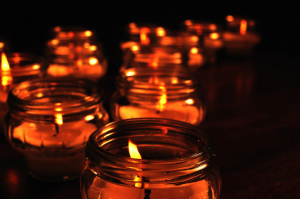 Since this post is supposed to be more about what to do over Halloween, I’ll try to keep the history lesson short. While for the most part Christians believe that Halloween comes exclusively from the old Celtic festival Samhain in which the dead ‘cross over’ for one night of the year and the living need to dress up in costume to scare them away and appease them with candy, there is another twist to the tale…

The fact is that while the above is true, in 601 AD Pope Gregory 1st issued an edict on native beliefs and customs and instructed missionaries to rather use the traditions of the locals rather than try to abolish them. In other words, if a certain group of people worshipped a tree, rather than cut it down, he advised them to rather consecrate it to Christ and allow its continued worship.

While we know that this in itself is in contradiction to what is clear in the Word of God, this at least sheds a little light onto how the lines between the pagan holidays and the Christian observation days managed to get so blurry.

I really believe this is good news for those who genuinely wish to celebrate the birth and death of Jesus but are so hesitant to partake in anything seasonal lest they be seen as partaking in pagan festivities.

Later in the 700s, Pope Gregory III moved the celebration of ‘All Saints Day’ from May 13 to Nov 1 in order to coincide with the dedication day of All Saints Chapel in St. Peter’s in Rome. The day before this feast was the evening’s vigil of ‘All Hallows Even’.

November 2 later became a holiday in France too, becoming All Soul’s Day.  The locals decided they couldn’t have a day celebrating those in heaven, those in purgatory and not a day for those damned to hell and so Halloween was really born in the UK, Ireland and spread through across the lands from there, even though it was never accepted in the church. If you’d like to read more about the origins of Halloween, you can do so here.

So what can you do on Halloween as a Christian single? Are you supposed to shun everything that it represents? Lock yourself up in your room while evil is afoot? I don’t think so.

But should you get involved with the ways of the world and embrace the rituals unthinkingly. I don’t think this is the right answer either.

Perhaps we should look closer to home, to family, to fellowship. During these festivities, while the majority of the population is not necessarily trying to celebrate evil, there are those who are and it would be fitting for the church body to be earnestly spending time in prayer over this holiday for protection over our loved ones.

Maybe your church shuns all things Halloween, but perhaps our duty as Christians is not to run blindly into celebrating feasts we never have before because ‘it’s not really evil’ and instead of looking for an excuse to look like the world, embrace the chance to stand out and up for what we believe in.

Get together on Halloween, by all means, but instead of dressing up as ghouls or superheroes and begging for candy, take communion, remember Christ and pray for the lost. Is this not after all what we are called to do? And when asked what your plans are, don’t shy away from being honest – be the light to the world you are called to be. God bless and stay safe over the holiday!

2 Responses to "What to do over Halloween as a Christian single?"